The Icelandic Golden Circle is classic for a good reason. Popular among Iceland tours, the best Golden Circle tour combines history, culture, and extraordinary nature to make your day unforgettable.

The Golden Circle Tour takes you on a wondrous circular journey through the heart of Iceland’s Southern Region, stopping at some of Iceland’s most iconic sites. You will visit historical places of Iceland, same as incredible Icelandic nature, everything in one day. The Þingvellir National Park, Geysir Geothermal area and Gullfoss Waterfall have their own stories to tell. Choose the Golden Circle tour time that suits you best and have a day full of memories you won't forget.

Rich History & Colliding Continents at Þingvellir National Park
The first stop during the Golden Circle tour is at Þingvellir National Park. Þingvellir is an attraction of great historical, geological, and cultural significance. Thingvellir is located in a rift valley where the Eurasian and North American tectonic plates meet. The UNESCO designated world heritage site is also the birthplace of the Althing—Iceland’s parliament founded in 930 AD—where the nation’s most powerful leaders would meet to decide on legislation and carry out brutal Viking-age justice. Thingvellir became Iceland’s first national park in 1930. It is also home to Iceland’s largest natural lake, Thingvallavatn.

Majestic Gullfoss Falls
Another stop during Iceland Golden Circle is Gullfoss (Golden Falls). Gullfoss waterfall gets its name from the golden color of its water as it churns up silt and sediment. The magnificent waterfalls lie in the Hvitá river and are fed by Langjökull, Iceland’s second-largest glacier. In total, Gullfoss is 32 meters high, falling two tiers that are 11 and 21 meters high, respectively. Gullfoss is also at the center of one of Iceland’s most famous acts of environmental activism. Back in the early 20th century, developers wanted to damn the mighty waterfall to generate electricity, but through the will and determination of Sigriður Tómasdóttir, Gullfoss was saved. Extra time is allotted at this location for a lunch break at Gullfoss Café.

Bubbling with Excitement at Geysir Geothermal Area
The last stop on the Golden Circle Iceland is at Geysir geothermal area is located in the Haukadalur valley and is the scenic home of the infamous Geysir hot spring. To visit is to pay your respects to the progenitor of all geysers as Geysir is the geyser for which all others are named. Geysir doesn’t erupt often but is surrounded by bubbling cauldrons of superheated mud, steaming pools, and Strokkur, a geyser that erupts every 6-10 minutes. The smells, colors, and eruptions at this popular destination are a window into all the geothermal activity happening across (and beneath) Iceland, making all those hot tubs, swimming pools, greenhouses, and geothermal energy possible.

Memories That Last a Lifetime
While any of these Golden Circle tour stops makes incredible fodder for your Instagram feed, they also all have rich histories and fascinating tales, each told with their own nuances by our knowledgeable guides. It’s not just facts and figures that bring these places to life, but the compelling stories our guides have collected over time. 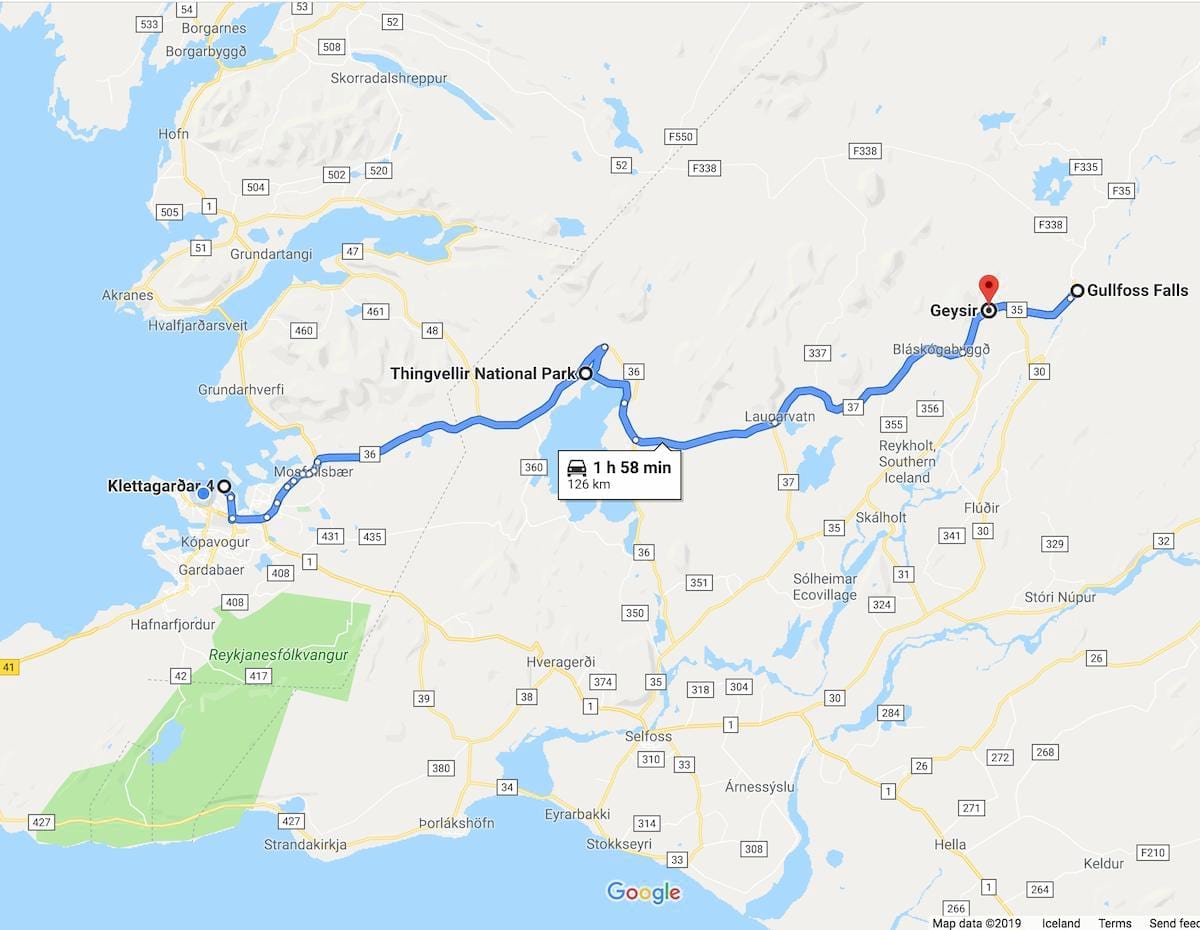 Together with traveling and visiting all Golden Circle stops, this tour is 7 hours.

Yes, the Golden Circle tour takes 7 hours, which means that if you liked it a lot, you can do it even two times in one day.

Yes, you can visit Golden Circle at any time of the year, but if you will decide to go there in the wintertime, we recommend you to have a skilled driver. Icelandic roads in the winter are something totally different from during the summer, and so it is always in the first place to be safe.

To go there and back is together around 250 kilometers.

Even it is prohibited to eat and drink in our coaches, during every stop, you can buy something to eat and drink at the Thingvellir National Park, Geysir Geothermal area, and Gullfoss Waterfall. There is a 10% discount at restaurants at Geysir and Gullfoss for all our customers. All you need to do is to show your tour confirmation when paying.

This Golden Circle tour is by default guided in English. More languages are also available for the 8:30 departure as follows: