The powerful Gullfoss, the explosive Geysir, and the historic Thingvellir National Park. Choose from a wide variety of tours to the Golden Circle and visit Iceland's most popular destinations featuring incredible waterfalls, breathtaking tectonic plates, and bursting geysers. Rich in culture, riveting history, and spectacular nature, a visit to the Golden Circle will create memories that last a lifetime. See below for all of the essential information on the Golden Circle.

Visit the essential sights and learn about the riveting history of the Icelandic Golden Circle with our best professional guides.

Combining the Golden Circle and Sky Lagoon, this breathtaking tour takes you on a wondrous journey through Iceland’s staggeringly raw beauty. It ends with the ultimate Icelandic indulgence: a luxurious soak in Sky Lagoon, a geothermal spa where the ocean meets the sky. Go on a journey that brings you the experiences of walking among geologic marvels, witnessing an erupting hot spring, discovering a magnificent waterfall, and unwinding in an outdoor geothermal spa.

Experience the highlights of the Golden Circle in a Super Jeep, travel up to the isolated highlands of Iceland, and try out snowmobiling on a glacier!

Come for the Golden Circle and stay for the Northern Lights. Join us on this day and night combo tour and discover the essence of Iceland.

Visit some of Iceland’s most significant landmarks along the Golden Circle with a knowledgeable Iceland Tour Expert leading the way and your friends & family besides your on this private tour.

All About the Golden Circle in Iceland

The Golden Circle—Thingvellir National Park, Gullfoss, and Geysir geothermal area—no visit to Iceland is complete without touring the main sites along this famous route. If you have questions about Iceland's most popular and most visited places, look no further. This is your complete guide to the Golden Circle.

What is the Golden Circle?

The Golden Circle is the name given to the route taken to the most popular sites in Iceland — Thingvellir National Park, Gullfoss (Golden Falls), and Geysir geothermal area. Hit all these spots, and you’ve done the Golden Circle.

Thingvellir became Iceland’s first national park in 1930. It is also a designated UNESCO world heritage site due to its historical, cultural, and geologic significance to the Icelandic people and the world. To walk through Thingvellir is to walk the fields where one of the oldest parliaments in the world first convened in 930 AD. Thingvellir lies in a rift valley created by the tectonic plates of the Mid-Atlantic Ridge, slowly drifting apart. It is also home to Iceland’s largest natural lake, Thingvallavatn.

Gullfoss (Golden Falls) is a waterfall and gets its name from the golden color of its water as it churns up silt and sediment. The magnificent waterfalls lie in the Hvitá river and are fed by Langjökull, Iceland’s second-largest glacier. In total, Gullfoss is 32 meters high, falling two tiers that are 11 and 21 meters high, respectively. Gullfoss is also at the center of one of Iceland’s most famous acts of environmental activism. Back in the early 20th century, developers wanted to damn the mighty waterfall to generate electricity, but through the will and determination of Sigriður Tómasdóttir, Gullfoss was saved. Thanks, Sigriður!

Geysir geothermal area is located in the Haukadalur valley and is the scenic home of the infamous Geysir hot spring. To visit is to pay your respects to the progenitor of all geysers as Geysir is the geyser for which all others are named. Geysir doesn’t erupt often but is surrounded by bubbling cauldrons of superheated mud, steaming pools, and Strokkur, a geyser that erupts every 6-10 minutes. The smells, colors, and eruptions at this popular destination are a window into all the geothermal activity happening across (and beneath) Iceland, making all those hot tubs, swimming pools, greenhouses, and geothermal energy possible. 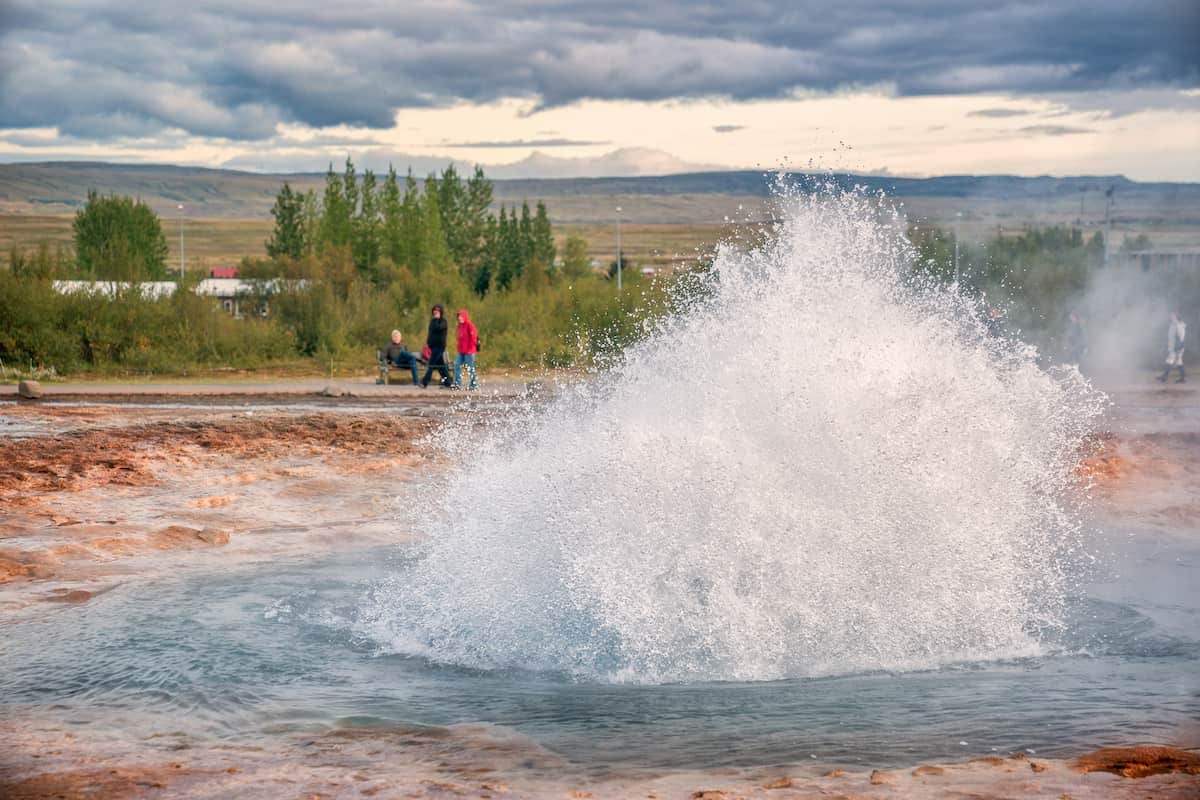 Where is the Golden Circle?

How to get to the Golden Circle?

Gray Line Iceland has several Golden Circle tours to choose from that will take you to the main attractions, so you can sit back and enjoy the scenery instead. We’ll get you there and back again, and all of our tour guides are Golden Circle experts—full of stories and fun facts on the region.

Iceland is a photographer’s paradise. Everywhere you turn, there’s another stunning vista. But if you want to really be in the moment and only take out your phone or camera for the best shots, we’ve compiled a list of the most Instagram worthy photo ops on the Golden Circle tour.

Gullfoss is a broad tiered waterfall, falling two “steps” before plummeting into the gorge below. But thanks to viewing platforms and a path that goes from the top of the falls to the bottom so you can hit all the angles.

●    Steaming Geysir (Geysir last erupted in 2016, but you might get lucky)
●    Strokkur erupting (every 10 minutes or so)
●    The mineral deposits in this geothermally active area can come in some pretty exciting colors and make for cool abstract photos.

When is the Best Time to Do the Golden Circle?

Anytime! But many visitors like to make several trips around the Golden Circle at different times of year to bear witness to the changes in the Icelandic landscape throughout the seasons. Thingvellir National Park, in winter, is often snow-covered. In the spring, its trees are budding, and its wildflowers are in bloom. Come summer, everything turns green, and in fall, the trees put on their fiery autumn colors. Just don't forget that Icelandic weather can change three times in 10 minutes, and so, always have a good and warm clothes with you.

All the seasons bring out something uniquely beautiful in the Golden Circle sites. When to visit is really up to your personal preference. Please note that daylight is limited at the height of the midwinter, and there is 24-hour sunlight in midsummer.

Preparing for the Golden Circle

Wearing layers is rule number one for dressing in Iceland. You can experience all the seasons in one day, that is just as the weather in Iceland is. A good rule of thumb is always to wear three layers:

Those more susceptible to cold may want to add wool leggings and a thermal undershirt. Warm socks, waterproof hiking boots, gloves, and hat are also a must.

The Perfect Golden Circle Tour for You

Traveling the Golden Circle is an exciting way to get to know Iceland. Join us!