The Ultimate Guide to Game of Thrones in Iceland

Gory battles, witty dialogue, and deep, dark secrets—fierce dragons, swordplay and deceit—the wildings, the Sparrows and the Children of the Forest... and those terrifying White Walkers. These are some of the reasons that keep us coming back to Game of Thrones. And as the final season approaches, there’s no better time to transport yourself to Westeros by visiting the show’s surreal landscapes. 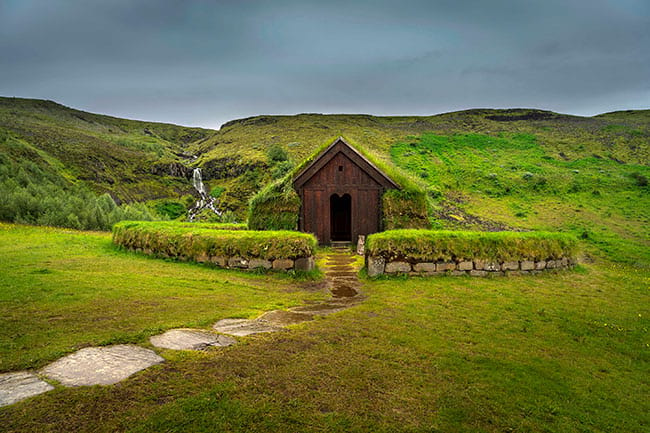 What creates the actual world of Westeros is the host of otherworldly landscapes: foggy woods, craggy mountains, vast icescapes, and tumultuous seas. These landscapes are the silent actors in the series, but their varied and striking characters are perhaps one of the most vivid and compelling parts of the entire production. 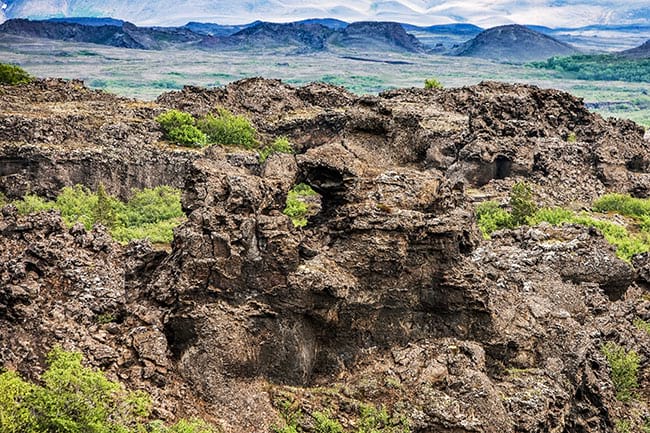 TIME TO GEEK OUT

Below is a rundown of Game of Thrones locations in Iceland, but if you’re interested in visiting the locations, check out Gray Line’s Game of Thrones tour. Several of the most popular spots are organized into a day tour.

The list below includes filming locations all over the country, so they can’t all be seen in a single day tour (Iceland is small, but we’re not that small!). The Game of Thrones tour, however, includes some of the most popular and iconic landscapes from the show, which really allow visitors to transport themselves to the harrowing world of Westeros.

And while the sites are truly breathtaking in their own right, what really makes the tour something special is the geeked-out superfans who guide them—some of the guides were even extras on the show and have some pretty great stories from filming on location.

In the Almannagjá gorge at Thingvellir National Park, you’ll relive one of season 4’s most striking scenes in episode 8, as Arya Stark and the Hound end their quest to reach Arya’s aunt Lysa, only to learn at the Bloody Gate that Lysa has been killed. The real path to the Bloody Gate is actually a rift valley leading to Öxarárfoss waterfall. But you can almost hear Arya’s deep, belly laughs at the absurd news of her aunt’s demise echoing off the rockface.

Further down Almannagjá gorge is where Tormund Giantsbane and Ygritte meet Styr and the Thenns as the cannibals prepare a gruesome meal over the fire in episode 1 of season 4. Here you can see a scene framed still from the show lined up perfectly in the real gorge, taken by the super-dedicated Satu and Tiia at FangirlQuest.com (their blog on visiting Thingvellir with a GoT frame of mind is required reading!) 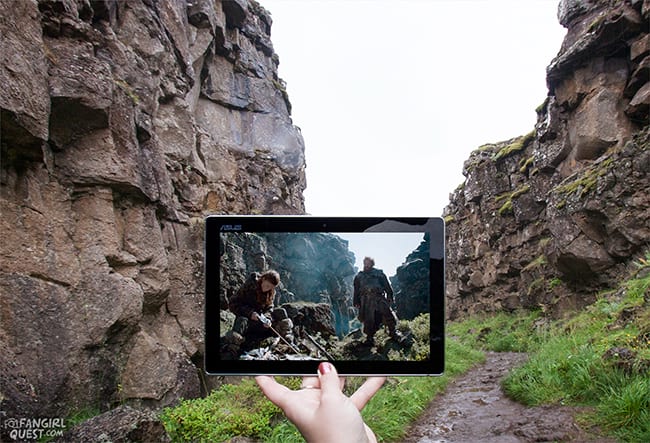 The strange lava formations at Dimmuborgir just east of Lake Mývatn in North Iceland have played the backdrop for a number of scenes. In its snowiest winter coat, Dimmuborgir (together with Höfði, which we also discuss here) becomes Mance Rayder’s camp from several episodes in season 3, including the scene where Ygritte steals Jon Snow’s sword in episode 5. 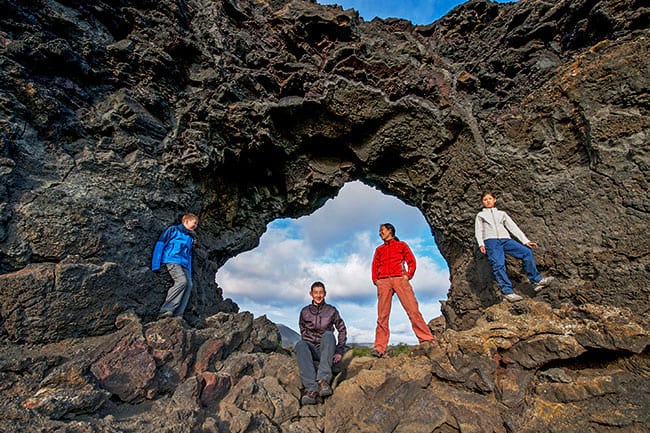 Another location in Thjórsárdalur valley is the remarkably tranquil Gjáin gorge with its lovely waterfall Gjárfoss. This is where, in season 4, episode 3, Arya and the Hound stop for a short while during their journey, and (you guessed it) argue. Arya also practices her swordplay here, but the real star of this scene is clearly the waterfall! 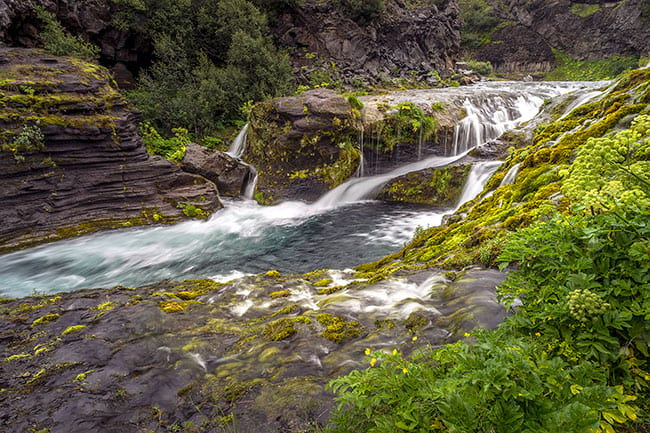 In the mood for a little GoT romance? Put on a little Barry White, light a few candles and make your way to Grjótagjá cave in North Iceland. The cave was formed as part of the volcanic activity in the area, and as such, it also boasts a Honeymoon-suite-esque geothermal pool. This is the cave where Jon Snow and Ygritte did the deed in episode 5 of season 3. Apparently, they had to move filming to a sound stage for the close-ups since it was getting so steamy from all that… geothermal water. 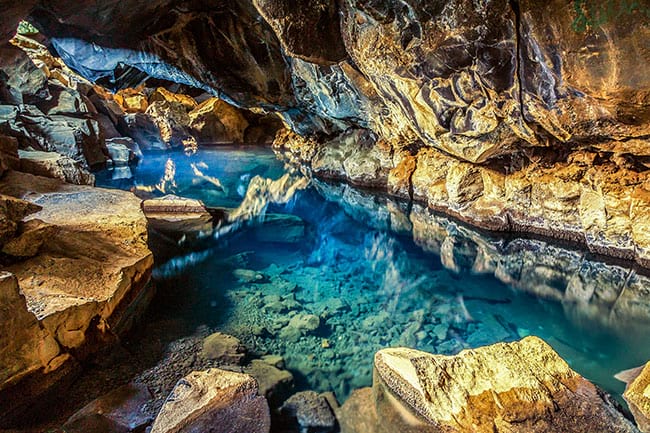 Hengill is a massive mountain in the Southwest that covers around 100 square kilometers. The terrain is varied, but as you walk through the area, you might have flashbacks to a brutal standoff between Brienne of Tarth and the Hound. The fight was filmed in several far-flung locations around Hengill and pieced together, but if you watch the fight unfold in episode 10 of season 4, you can spot several landmarks from Hengill. 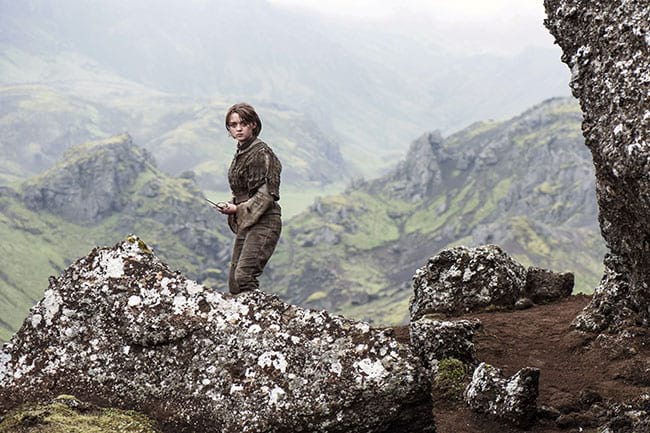 Hveraströnd Sulphur Springs, not far from Lake Mývatn in the North of Iceland, is a barren wasteland filled with steam from the fumaroles and other geothermal features. The show makers, however, cleverly “recast” the screen of steam as a near whiteout blizzard that Samwell Tarly trudges through the north of the Wall at the beginning of season 3. 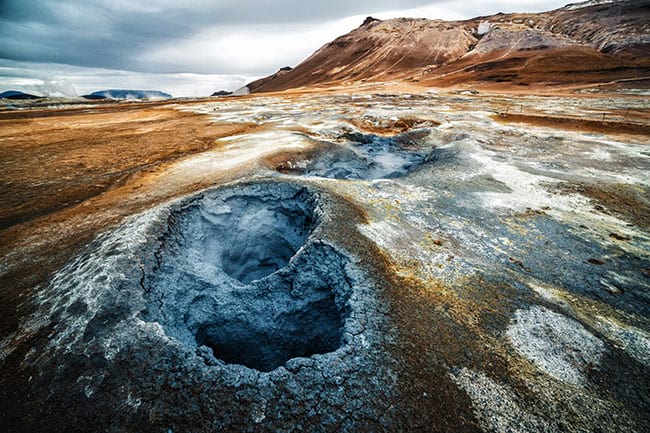 In all but the first season of GoT, Iceland has been chosen to portray the snowbound lands north of the Wall. And while many of these landscapes are high in mountain passes, if you visit them in summer, you won’t get the same “north-of-the-wall” and it’s not just because there aren’t any roaming hoards of blue-eyed, baby-stealing frost demons, it’s because there’s no snow (the summertime exception, of course, is locations filmed on glaciers, where it’s winter all summer long. But we’ll get to that later).

The Höfðabrekka heath and the sprawling Myrdalsjökull just northwest of it are some of the main filming locations that bring to life the uncharted area north of the Wall. Namely, the Frostfang Mountains and the Fist of the First Men ruins in season 2, (like episodes 5 and 8), where Samwell Tarly and Grenn find a cache of dragon glass daggers, ostensibly the leftovers from whatever fresh hell happened *last winter*. 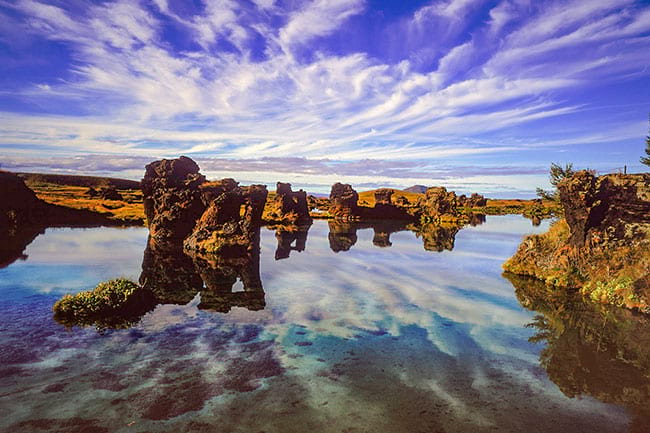 The bizarre lava stack formations at Höfði on the shores of Lake Mývatn in North Iceland have a starring role in the establishing shots of Mance Rayder’s wildling camp in episode 5 of series 3, just before Jon Snow has a row with Orell, the wildlings’ grumpy warg. While close-up shots of the camp were filmed at Dimmuborgir, the wider shots, especially where the lake is visible, were shot at Höfði, and the two were patched together to create the camp. 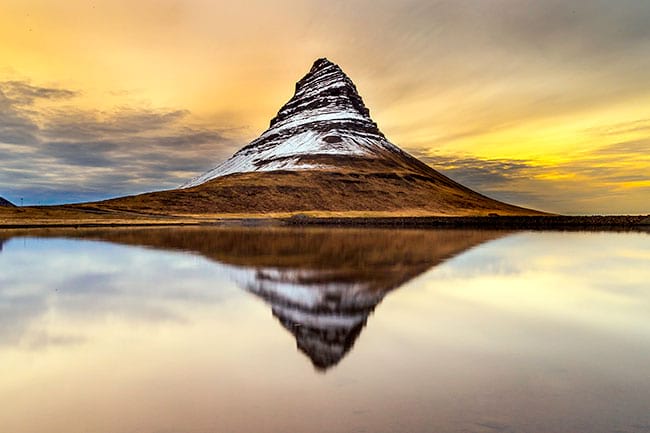 Kirkjufell is an iconic mountain in Iceland and one of the most photographed landmarks on the Snæfellsnes peninsula, a place shrouded in legends and lore, which makes it only fitting that the mountain features so prominently in seasons 6 and 7 as the “arrowhead mountain”. The Hound sees a mountain shaped like an arrowhead where the dead are marching past, and Jon Snow and company seek it out as they look for the white walker army. The real mountain, Kirkjufell, is not crowded with frost zombies and not even that hard to find as it stands, big as life, right on the road that runs along the north side of Snæfellsnes peninsula. 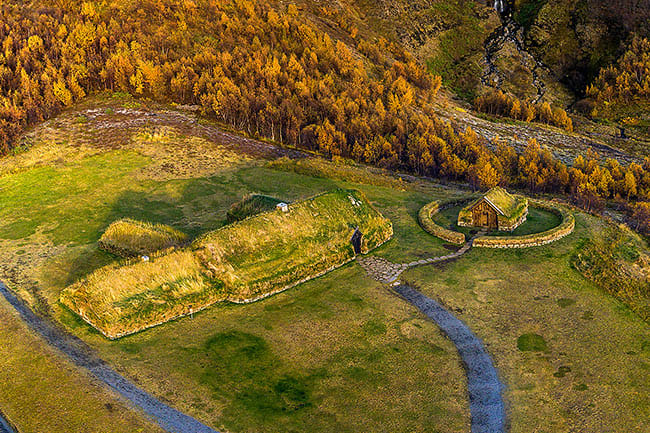 One of the most heart-rending moments from season 4 is undoubtedly when young Olly’s village is attacked by the wildings and Thenns in episode 3. Although Olly’s village is laid to waste, you’ll be met with a much warmer welcome (and absolutely zero Thenns and wildings) when you visit Stöng, the recreation commonwealth Icelandic farmstead in Thjórsárdalur valley. You’re almost waiting for Ygritte’s arrow to come flying past your head as you meander among the turf-roofed buildings and seemingly tranquil surroundings. 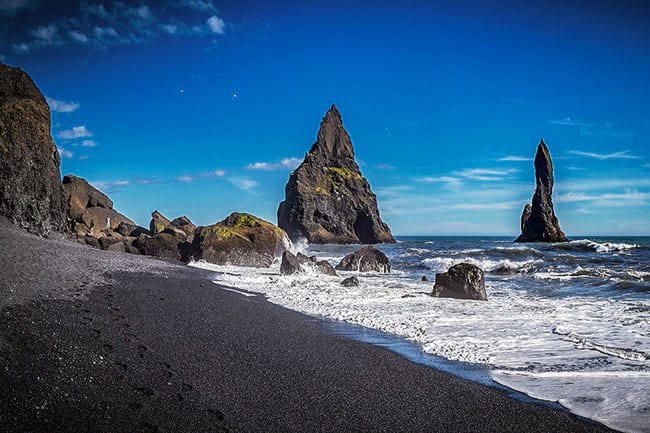 In the world of Westeros, Reynisfjara beach on the South Coast plays the role of Eastwatch-by-the-Sea, the austere easternmost castle of Night’s Watch along the wall. This might be one of the most instantly recognizable locations (minus the castle, which was added in post-production with CGI), if for no other reason than black volcanic beaches tend to make a memorable impression. In season 7, Jon Snow lands here as they venture north. 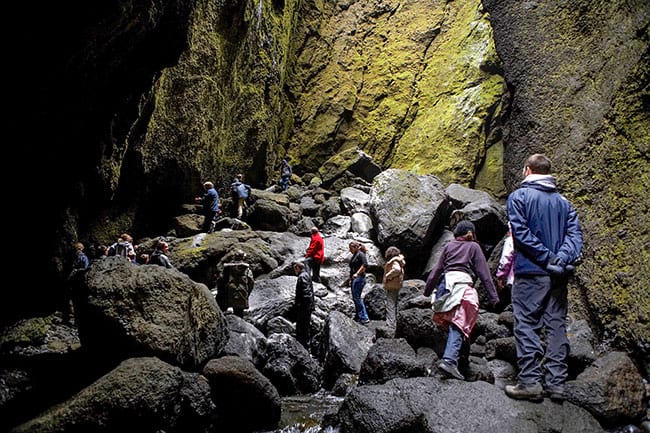 While Stakkholtsgjá Canyon in the Thorsmörk area is undeniably breathtaking, that nagging feeling that the undead might be waiting around any corner is not entirely unfounded! This is where, in season 7, episode 6, Jon Snow and his band of merry men manage to capture a White Walker. 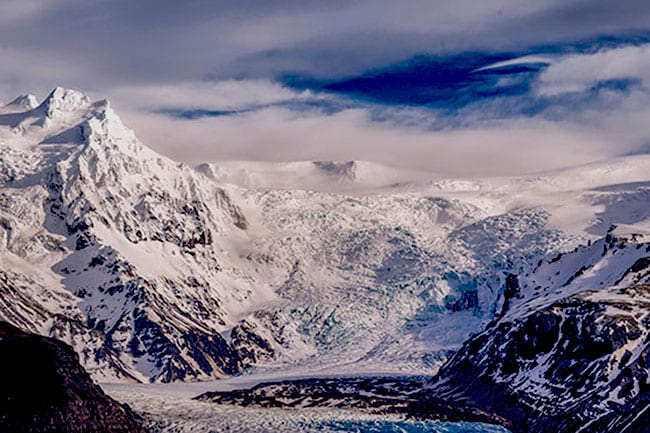 Svínafellsjökull is a glacial “tongue” or a sort of tentacle in the case of the octopus-like Myrdalsjökull glacier. Whatever you want to call it, this offshoot of ice comes very close to the ring road and is a great spot to catch a glimpse of the extraordinary glacial landscape. While you’re there, you might want to kidnap your very own wildling, much as Jon Snow and the Night’s Watch captured Ygritte in episode 6 of season 2.

But Svínafellsjökull might be fresher in your mind from the penultimate episode of season 7. It was the battlefield for the legendary combat that Jon Snow and Daenerys (and dragons) waged against the White Walkers and the Night King, which ends unfortunately with the slaying of the dragon (and we all know that the dragon didn’t stay dead for long). 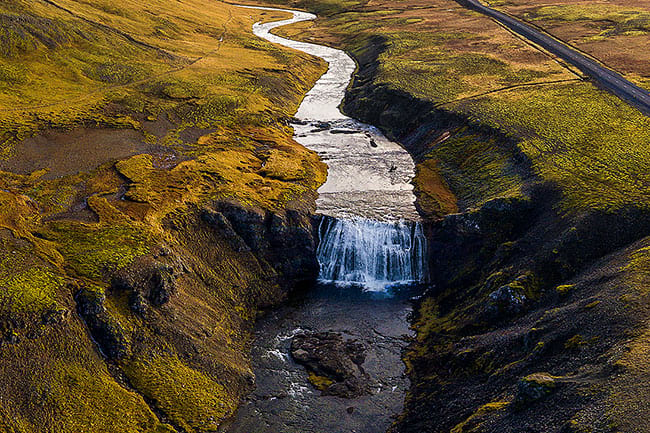 If you keep on ducking while visiting Thorufoss, there’s a good reason. It’s probably because you don’t want to meet the same unlucky fate as the goat who got gobbled up when Drogon swooped out of the sky over this picturesque waterfall for a light snack in episode 6 of season 4.

Game of Thrones might be wrapping up soon, but Iceland will, fortunately, remain open! Join us on the Game of Thrones tour to experience it for yourself. As series 8 unfolds, we’ll be updating our list and continue to geek out for the benefit of our fellow fans.